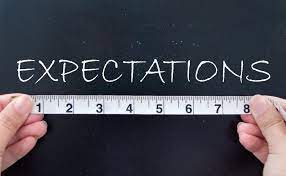 Why is it so important to have realistic expectations?

First off, what is reality, well that’s probably a whole book in and of itself! According to the Cambridge Dictionary reality is defined as, “the state of things as they are, rather than as they are imagined to be.” I believe it’s really hard to see a situation for what it is for many reasons.

One reason being there is something called a confirmation bias. The term confirmation bias was first coined by English psychologist Peter Wason and is defined as the tendency to favor information that confirms a person’s beliefs or values. When making a decision, forming an opinion or deciding on an action we tend to hone in on the information that supports the beliefs we already have rather than seeing the whole picture and taking note of information that might challenge what we believe. If we don’t challenge what we already believe how do we get a realistic read on what we are facing. A very simple example of confirmation bias is ignoring news that contradicts your beliefs like watching or listening to one news source.

Starting today what can you do differently in order to have realistic expectations? Well first, learn to be in the present. I’m a big believer in learning to breath. I also think it is really important to question your beliefs – what can you control, how do things HAVE to be done, this SHOULD happen, are important beliefs to be aware of and question. Truth be told just by starting to question your expectations you probably are beginning to set realistic expectations.